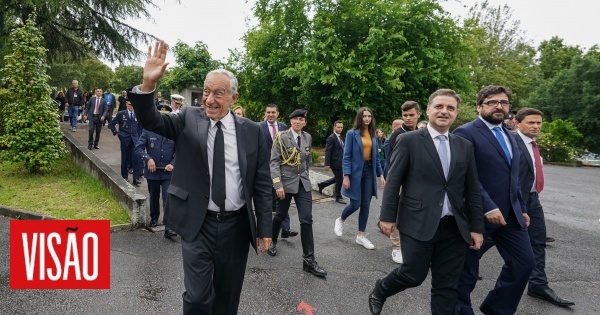 Marcelo Rebelo de Sousa was speaking to journalists in Braga, about the note of condolence he published today, in which he says that the greatest tribute that can be paid to the painter is "to assure , through interventions by public and private bodies, that part of Paula Rego's legacy will remain in Portugal".

“Fortunately, in recent times the Gulbenkian Foundation has purchased perhaps Paula Rego's most important works. This was done even at the end of his life, we know today, on the initiative of his son, Nick, and thanks to the understanding of the president of the Calouste Gulbenkian Foundation, Dr. Isabel Mota,” said he pointed out.

Then, the Head of State defended that "everything that can be done, complementing what Gulbenkian has already done, even in relation to works that are not the most emblematic, to have in Portugal in the future the testimony to what was a very rich life”. and a projection in the world, must be done".

The President of the Republic specified that “part of the works” of Paula Rego are, “not definitively, in a museum which is her museum in Cascais”, the Casa das Histórias.

“In the future, the state and private entities that can, should bring to Portugal or permanently keep in Portugal the greatest number of works by Paula Rego,” he added.

Marcelo Rebelo de Sousa made statements to the media following a visit to Maximinos Secondary School, in Braga, where he is for the Portugal Day celebrations, which officially start on Thursday morning.

The June 10 commemoration program will continue in London until June 12, with the participation of the President of the Republic and the Prime Minister, as well as the Portuguese community in the United Kingdom.

Paula Rego died today, aged 87, in London, where she lived.

On January 28 of this year, the Calouste Gulbenkian Foundation announced the acquisition of Paula Rego's works "O Anjo", from 1998, and "O Banho Turco", from 1960.

According to a press release published at the time, "with this incorporation, the Calouste Gulbenkian Foundation" has consolidated its international position as a private institution with the largest and most important collection of the artist, consisting of 37 works".

Isabel Mota, meanwhile, ceased her functions as president of the Calouste Gulbenkian Foundation, a position currently held by António Feijó, since May 3.

Maria Paula Figueiroa Rego, born in Lisbon on January 26, 1935, in a family of republican and liberal tradition, began to draw from an early age, a talent recognized by the teachers of St. Julian's School, in Carcavelos, and left for the British capital at the age of 17, to study at the Slade School of Fine Art.

She received a grant from the Calouste Gulbenkian Foundation to research children's stories in 1975, and in London she met her future husband, the English artist Victor Willing, whose Paula Rego exhibited several times at the Casa das Histórias. , in Cascais.

Casa das Histórias, which opened in Cascais in 2009, a project by architect Eduardo Souto de Moura, with an important collection of works by the author, has featured exhibitions of his work and other artists, mainly Portuguese, with whom the painter had affinities.

In recent decades, Paula Rego has addressed political issues, such as the abuse of power, and social issues, such as abortion, among others, in the female universe. Her work was influenced by folk tales and literature, notably the writing of Eça de Queirós, which led her to paint paintings inspired by books such as 'A Relíquia' and 'O Primo Basílio'.

In 2010, she was ordained Official Dame of the Order of the British Empire by Queen Isabella II and received, in Lisbon, the prize for Portuguese personality of the year awarded by the Foreign Press Association in the Portugal.

To encourage young people to draw, the Paula Rego Prize was created in 2016, an annual prize awarded to students of the Faculty of Fine Arts in Lisbon.

In 2019, she received the Medal of Cultural Merit from the Ministry of Culture.

His work is represented in multiple public collections, both nationally and internationally.

In November 2021, Galeria 111, which has represented the painter in Portugal since the beginning of his career, also organized an exhibition in his honor, and the "relationship of friendship and complicity", entitled "Saudades", with 27 works that revisit it. artistic journey from the 1980s to more recent works from the painter's studio in London.