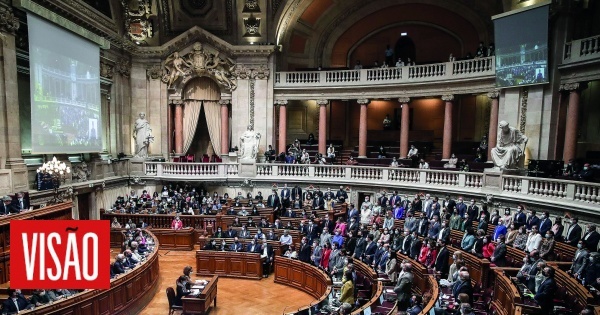 The Parliament tries again to decriminalize euthanasia. The bills of the PS, BE, IL and PAN were approved in general, this Thursday, by 128 deputies (the socialist project), 127 deputies (IL and BE) and 126 (the PAN project). Along the way was the referendum, proposed by Chega, with 147 votes against.

Voted in favor of the PS bill: 106 Socialist MPs, six Social Democrats, eight from the Liberal Initiative, five from the BE, the PAN MP and the Book MP. There were 5 abstentions and 88 votes against (on the Chega, PCP and 63 PSD benches). In the other three bills, the votes were similar (even 88 votes against, with 7 abstentions for the PAN and 6 for IL and BE).

Voted in favor of the PS bill: 106 Socialist MPs, six Social Democrats, eight from the Liberal Initiative, five from the BE, the PAN MP and the Book MP. There were 5 abstentions and 88 votes against (on the Chega, PCP and 63 PSD benches). In the other three bills, the votes were similar (even 88 votes against, with 7 abstentions for the PAN and 6 for IL and BE).

The four bills are now under discussion in the specialty, where they will be converted into one.

The ball is thus closer to reaching the pitch of the President of the Republic, who until now has remained silent about what he will do when he receives the new euthanasia diploma, which will already arrive in Belém with messages from parliamentarians, left to the House of Democracy. Socialist Isabel Moreira guaranteed, during this Thursday's debate, that "the necessary work has been done and that the Constitutional Court (TC) has emphasized so well", considering that "for those who are in good faith, the fatal disease never meant imminent death. "We believe that in matters of comparative or national law, there are no denser notions than these, nor more defensive law", he defended.

In turn, the blockist leader, Catarina Martins, seized the Head of State to urge him to promulgate the law, for the third time, without looking at "personal judgments", because, according to the deputy: "The euthanasia is really the will of the vast majority of the country”.

The euthanasia diploma was adopted, for the first time, in the Assembly of the Republic in January 2021, but it was stopped by the Constitutional Court which, although it did not declare medical aid unconstitutional to die for, has spoken out against certain standards, leaving clues about the members circumventing that decision. Last November, after modifications were made to the text, parliamentarians once again approved euthanasia in Parliament, but the President of the Republic reiterated the veto, citing "contradictions in the diploma concerning one of the causes of recourse to medical assistance in dying”. because the document uses the terms “fatal disease”, “incurable” and serious disease interchangeably”.

Marcelo also defended, at the time, that not clarifying the notion of "terminal disease" in the final drafting of a law that decriminalizes medical assistance in dying would be a "radical solution". However, the four parties that have submitted and approved bills have crossed out this expression from their texts, focusing instead on the clues left by the Constitutional Court.

88 deputies voted against: "For bad solutions there are no good laws"

In the hemicycle, 88 parliamentarians rose to vote against the four bills, relying mainly on the arguments of "violence against doctors" and the lack of palliative care within the National Health Service (SNS), who could have avoided euthanasia situations. “Is medically assisted death the only solution? More answers? Are there no more solutions? asked Social Democrat MP Paulo Rios de Oliveira, who voted against initiatives to decriminalize medical assistance in dying, while his bench gave the freedom to vote on this subject. “The question of life and death are not minor questions,” he continued, arguing that the discussion should include the subject of palliative care and that “the day when the solution to suffering is death , we have failed” – “For bad solutions there are no good laws”.

On the bench of the PCP, where all the parliamentarians voted against euthanasia, Alma Rivera considered "that the meaning of progress in human societies is to overcome disease and suffering, by mobilizing their resources, their scientific and technological knowledge , ensuring that all human beings benefit from these advances. It is in this direction of progress that the State must engage and not in the creation of the conditions of anticipation of death”.

Along the same lines, André Ventura, from Chega, accused the “left of wanting to kill the elderly and create obstacles in the SNS”, debating a law in haste and without listening to the experts on the subject.

The Assembly of the Republic also said “no” today to the referendum on euthanasia, despite the favorable votes of the Chega bench (the supporters) and several PSD deputies. A total of 71 parliamentarians voted in favour; there were 2 abstentions and 147 votes against.

One of the voices heard in parliament against the referendum was that of the liberal leader, João Cotrim de Figueiredo, who called the Chega initiative "a crude attempt to do unacceptable things", as "setting a precedent that the fundamental rights and freedoms of individuals are referable – they are not and should never be”.