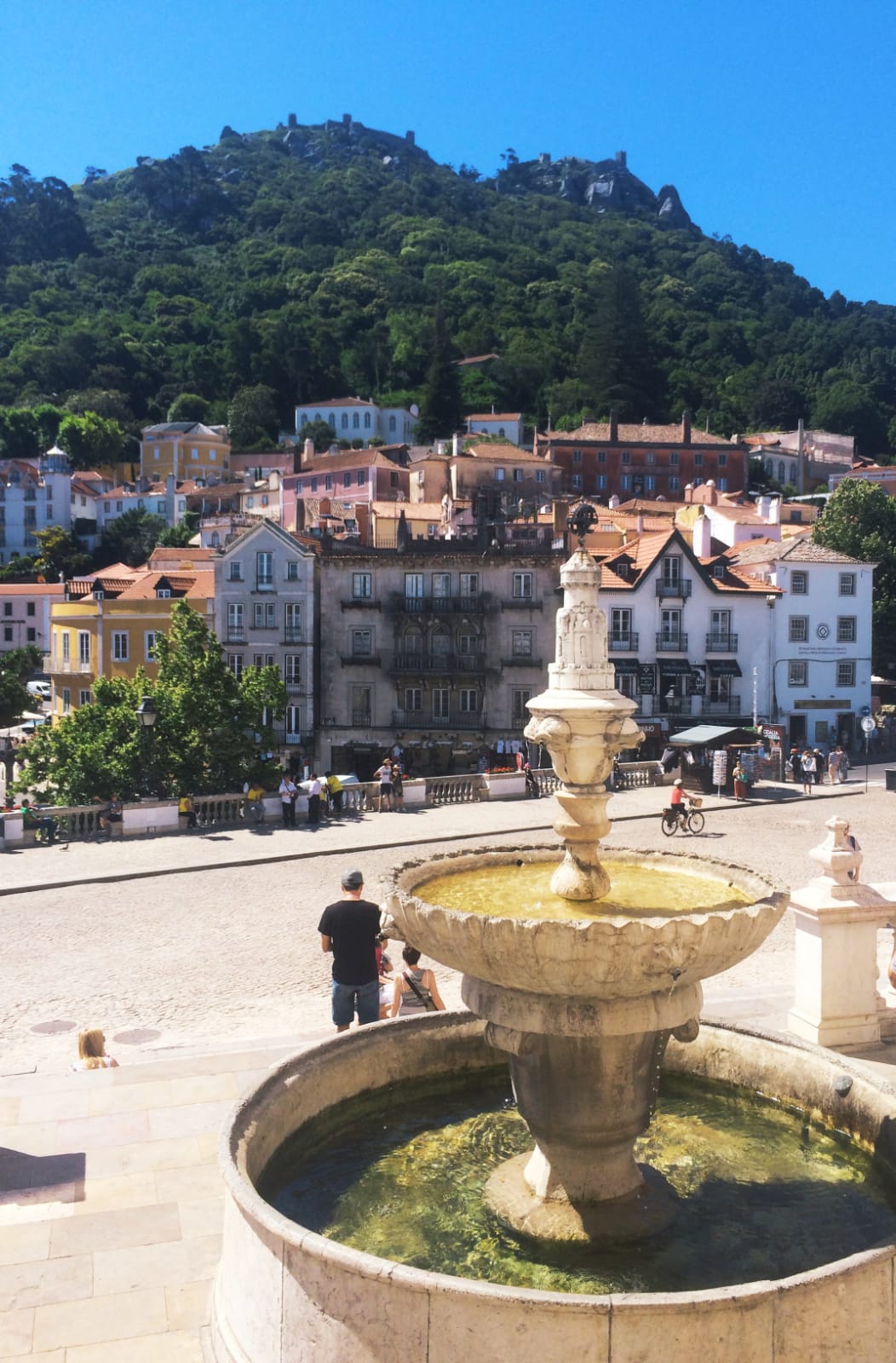 Sintra is a great option for a day trip for those who are in the Portuguese capital. It is impossible not to be charmed by this small town on the mountainside.

How to get there and what to do?

This exotic town of Sintra is located just 30 km from Lisbon. If you are not driving, it is perfectly easy and possible to get from Lisbon to Sintra by train. The “comboio”, as they call it, leaves from Rossio or Oriente station towards Sintra, and the ticket costs between € 1,80 and € 2,13 each way. The journey takes only 46 minutes.

Arriving in the center you will find tourist bus options with access to two routes of the type hop on hop off. You can buy it directly from the driver for € 6,90.

I opted for the 434 bus line called “Circuito da Pena”, which passed the places I most wanted to visit. With this line you will pass by the dos Mouros Castle, then the Pena Palace and then to the city center (near the Sintra National Palace). Finally, you can walk 10 minutes to the Quinta da Regaleira Palace.

Another option is the route of line 435, called “Vila Express”. It starts with a stop at Palácio da Vila (or National Palace of Sintra), the next stop is Palácio Quinta da Regaleira, followed by Palácio de Seteais (Hotel Tivoli), and finally at Palácio de Monserrate.

Places not to be missed on your itinerary!

Le Moors castle dates back to the beginning of the occupation of Portugal by the Moors in the XNUMXth century. We recommend that you set aside at least an hour and a half for this visit.

Its construction is on a rocky massif, isolated on one of the peaks of the Sintra mountains, in Extremadura. From the top of its walls, you can enjoy a privileged view over the entire countryside which extends to the Atlantic Ocean.

Its interior is magnificent, containing rooms and courtyards with decorations that mix Manueline, Moorish and Arabic styles. The result is really very extravagant.

Le pena palace is the most popular palace in Sintra, and probably in all of Portugal. There is a prime location at the top of the Serra de Sintra.

Since 2007 it has been one of the 7 Wonders of Portugal, being the most visited Portuguese monument in the country and a World Heritage Site. Due to its size, rich detail, and crowds of tourists, set aside at least 3 hours to get to know it.

In the XNUMXth century, the place where the palace is located gave rise to a chapel dedicated to Nossa Senhora da Pena. In the following century, it was enlarged and transformed into a convent of the Order of Jerônimos.

In 1755, the Lisbon earthquake caused a great destruction of this building. It remained abandoned for 80 years, until King Fernando II acquired the property.

The vivid shades of yellow, red and lavender in the towers of this romantic architectural palace set the world running.

Inside, the amount of detail is striking: Moorish arches, arabesque details, Gothic, Manueline and Renaissance elements. Its exterior consists of romantic gardens with a collection of rare trees, lakes, fountains and sculptures.

The historic center of Sintra

Take time to rest and recharge your batteries! You can take a short stroll through the streets of this charming historic center. Take advantage of entering its small shops, but also its bars and restaurants to taste the culinary specialties of this region.

Be sure to stop at the Casa Piriquita to taste the sweets representing the medieval convent for which the city is famous! For more information, see: all about the typical flavors of the Sintra region.

Quinta da Regaleira is a magical and mysterious place, a must-see on any visit to Sintra. The romantic architecture of the palace and its lush park are the elements that bind this Mansão Filosofal Lusa, a wonder nestled in the dense vegetation of the Sintra mountains.

It was built between 1904 and 1910, during the last period of the monarchy. In 1982, Dr. António Augusto Carvalho Monteiro acquired this monument, to found his chosen place there. To make this place more exotic, he associated his project with the Italian architect Luigi Manini (1848-1936).

Reserve 1 hour and a half to visit it!

His garden is a representation of the cosmos in a paradisiacal atmosphere that does not deny the existence of the Dantesque underground world. You will see the towers, caves, underground tunnels, fountains, statues and of course the Initiation Well.

This well is in fact an inverted tower. It sinks 27 meters deep into the earth on a spiral staircase with nine landings.

Finally, if you still have a little time before leaving, do not hesitate to visit the National Palace of Sintra, located in its historic center.

The Palácio Nacional de Sintra, also known as Palácio da Vila, was one of the Portuguese royal palaces. Its construction began in the 1910th century, with an unknown author. The Portuguese royal family used this palace until the end of the monarchy in XNUMX.

The first impression looking at its exterior is that it is a relatively simple building, with some Arabic details. Its most striking feature is the two huge fireplaces which give it an unusual shape.

The interior is magnificent! With rooms and courtyards whose decorations mix Manueline, Moorish and Arabic styles, which gives a rather extravagant result. The Mudejar earthenware tile decorations are particularly interesting and worth seeing.

The highlights of this palace are: the Sala dos Brasões, with a magnificent golden ceiling decorated with coats of arms, and the Sala dos Cisnes, with its Manueline decorative elements and tile coverings.